What is flash drive? 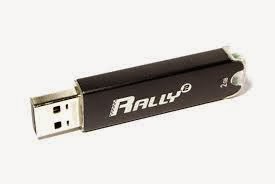 Definition of USB Flash Drive (Flash Disk) is a data storage device that consists of flash memory with an integrated Universal Serial Bus interface (USB). USB flash drives are removable and rewritable (re-write), and physically much smaller than a floppy disk, weighing less than 30 grams. UFD storage capacity of 2 terabytes are planned to be created.
In some UFD can enable write / erase cycles up to 100,000 depending on the type of memory chip that is used and can store over 10 years. USB flash drives are often used for the same purpose as a floppy disk or CD-ROM. UFD is smaller, faster, have greater capacity and more durable. USB stick using the USB mass storage standard, supported by modern operating systems, such as Linux, Mac OS X, Windows, and Unix. USB drives with USB 2.0 port support can store more data and transfer data faster than any other optical disc drives like CD-RW or DVD-RW drives and can be read by other systems such as the Xbox 360, PlayStation 3, DVD players and in some mobile smartphone.
inventors
The discovery Flash Memory (NOR and NAND) by Dr. Fujio Masuoka in 1984 while working on a Toshiba flash itself while the name given by his colleagues that Mr. Shoji Ariizumi. NOR type flash chip types traded introduced by Intel in 1988.
NOR flash is a flash basic requiring considerable time in the erase and write, but provides full address and data paths, providing random access to all memory locations. But it is great to replace the old model ROMs, which allows to update the program code stored. An example is the BIOS
NAND flash in Announced by Toshiba in 1989, which could make the process of deletion and writing faster, requires a small order of chips per cell. With increased capacity, but the cost can be reduced causing the flash type is suitable for secondary storage.
It is uncertain who developed it first time because there are three companies are disputing that M-Systems, Netac, and Trek 2000
The first commercial product
Trek Technology and IBM began selling the first commercial Flash Disc in 2000 Singapore Trek Technology sold a model under the brand "thumbdrive", and IBM marketed the first such drives in North America with a product called "DiskOnKey" developed and produced by M-Systems a company based in Israel. Has a storage capacity of 8 MB​​, five times greater than the capacity of a floppy disk at that time. In 2000 Lexar introduced a Compact Flash (CF) with a USB connection, and a USB cable to a USB hub.
Second Generation
Modern flash drives use USB 2.0 connectivity. However, when the UFD is not using the full transfer speed of 480 Mbit / s (60MB / s). File transfer speeds vary on the UFD, Speed ​​Mbyte per second in units such as "180X" means 180 x 150 KiB / s. Some UFD can read data up to 30 megabytes / s (MB / s) and writes the data by about half. This transfer speed about 20 times faster than USB 1.1 at full speed is limited to a maximum speed of 12 Mbit / s (1.5 MB / s).
Third Generation
Like the previous USB 2.0, USB 3.0 offers data transfer speeds dramatically increased compared to its predecessor. USB 3.0 is capable of reaching transfer speeds of up to 5 Gbit / s, compared to USB 2.0 's 480 Mbit / s. All devices are USB 3.0 downward compatible with USB 2.0 ports. Although USB 3.0 enables data transfer rates are very high, but the majority of USB 3.0 Flash Drives do not utilize the full power of USB 3.0 interface due to limitations of their memory controllers.
Design and implementation of One end of the device is equipped with a USB connector that is standard. There are four sections that normally exist in the flash drive:
Standard USB connector - provides an interface to the host computer.
USB mass storage controller - a small microcontroller chip ROM and RAM.
NAND flash memory chips - stores data (NAND flash is also used in digital cameras).
Crystal oscillator - produces the device's main 12 MHz clock signal and controls the data output device through a phased-locked loop.
Add Comment
Hardware
More From Author
Hardware
Load More