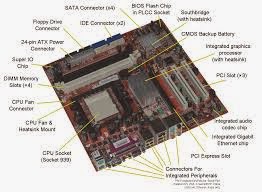 Definition and Function of Motherboard - Hardware or are familiar be heard in the local language as computer hardware is part of the computer that has the properties of concrete or tangible form and used to be formed into a module in accordance with the naming of their respective functions. Among the many components of computer hardware, the most important and vital is the motherboard.
Did you know each of the sense and function of the motherboard? Or still not clear with the explanation that once you get? Here will be explained further about it with details that some explanation will be packed into a container appropriate article and easy to understand. So your goal to learn basic computer, by adding insights into understanding the motherboard and its function will see the point of maximum achievement.
No need to linger time, we simply refer to some important issues related to understanding and following the motherboard functions.
understanding motherboards
The motherboard is the computer hardware that has a major role and the most vital. Where in the way it works, the motherboard with the task to organize the technical stuff about the BIOS (Basic Input Output System), Chipset (regulator input-output connections), RAM (memory temporary data storage), VGA card (graphic data storage memory) , processor, and Additional cards (PCI, ISA).
Motherboard function
The main functions of the motherboard is the central link between the hardware with other hardware. That is, the motherboard here to connect language task antarperangkat code hard to be synergized into a computer device work activities. For example, the motherboard serves to connect some hardware such as the processor, RAM, hard disk, printer, power supply, and much more.
If readers want to assemble your own computer, it should be examined first before buying the motherboard. That is, here you must pay attention to several things related to the purchase of the motherboard hardware, among other things: the type of processor socket, BUS frequency, number of SATA and PCI sockets, sockets amount of RAM, and the most important is the reputation and reliability of a brand than the motherboard hardware that will purchased.
In Indonesia alone, has been widespread branch of the renowned manufacturers producing motherboards. Fierce competition was shown by the manufacturer to be the market leader in motherboard hardware. Like for example, the brand products now have a good reputation and reliability among others: Gigabyte, Asus, Albatron, AOpen, Abit, ECS, Biostar and Jetway. Price banderolan each brand also has a variant that is quite varied. Similarly, for the sector specifications.
Similarly, some of the things we can say about the notion and function of the motherboard. Hope it can help you in search of information as has been discussed earlier above
Add Comment
Hardware
More From Author
Hardware
Load More