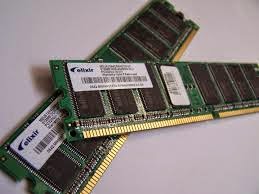 Definition of RAM, Random Access Memory
You would often hear the term of RAM, either on mobile devices such as smartphones and tablet PCs as well as on your laptop or desktop PC. In the specification of the device, the RAM becomes one of the things that is required, and can be used by the user as a guide in selecting the device. Then if the notion RAM itself.
Public Understanding of Memory
Memory is an electronic circuit that is able to store data and program instructions as well. Sirkui can be thought of as a work space for the computer where the memory determines the size and number of programs that can be run in the same time, as well as the amount of data that can be processed. The term memory itself is used on various hardware such as primary storage, primary memory, main storage, main memory, internal storage, and RAM. After learning the general sense of memory, let's move on to the notion that the RAM itself
What is RAM?
Definition of RAM is the memory that can be used by the users to store programs and data. Most of the RAM is said to be volatile, in the sense that if power unplugged from the computer and the computer is off, then all content in the RAM will be lost permanently.
From the definition of the RAM, then you know that it is temporary and volatile. Therefore created a media other permanent storage. This is usually referred to as secondary storage. Secondary storage is durable and not too volatile, this means that all of the data or programs stored in it can remain there even if the power or the power is turned off. Some examples of this such as secondary storage is magnetic tape, hard disk, magnetic disk and optical disk.
RAM consists of a set of chips, and these chips are able to accommodate:
· Data to be processed
· Instructions or programs to process the data
· Data that has been processed and waiting to be sent to output devices, secondary storage or communication device also
· Instruction operating system that controls the basic functions of the computer system
The structure of the RAM is divided into 4 sections, namely:
1 Input storage, used to hold the input is entered via the input device
2 The program storage, used to store all the program instructions that will be processed
3 Working storage, used to store data to be processed and the results of processing
4 Output storage, used to hold the final result of processing the data to be displayed to the output device
RAM has the ability to perform checks of the data that is stored, which is called the parity check. If data is lost or corrupted, it can be seen from an additional bit called parity bits or check bits. Therefore in understanding the topic of this RAM, Paseban add some terminology that is often used in discussions of RAM:
Bits, ie a binary numbering system that represents the smallest unit of data in a computer system. A bit consists of only two digits are 1's and 0's in the computer, a 0 means an electronic or magnetic signal is gone or absent, while 1 means the opposite.
Byte, which is a group of eight bits. A byte represents one character, one digit or one value. The capacity of the computer memory, or RAM, is expressed in bytes, or a set of bytes.
For example, 1 byte in RAM memory consists of 8 bits, a parity bit is used a bit extra, so be 9 bits.
Add Comment
Hardware
More From Author
Hardware
Load More