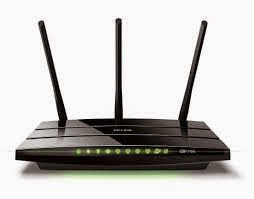 A router is a network device that is used to divide the protocol to the other members of the network, with the router then a protocol can be in sharing to other network devices. Example applications are if we want to split the IP Address to the members of the network, we can use this router, the router features is the inclusion of DHCP (Dynamic Host Configuration Procotol), the DHCP setting, then we can divide the IP address, the other facilities of the Router is the existence of NAT (Network Address Translator) that can allow an IP address or a shared internet connection to another IP address.
for example, if on a network device (computer) has the IP Address 192.168.0.1, then enable other computers to communicate, must be given the IP address of the Network Identification 192.168.0 and the Host Identification 2-254, example 192.168.0.10, 192.168.0.11 and so on.
Problems will arise when the networks connected very much (usually above 20 device), an administrator will be forced around to setting up the IP address of each host, therefore we can use the Router.
Types of Routers:
1.Router Application.
2.Router Hardware.
3.Router PC.
Router application is an application that can be installed pad operating system, so the operating system will have the ability as a router, an example of this application is WinRoute, WinGate, SpyGate, WinProxy and others.
Hardware Router is a hardware router that has the ability, so that hardware can emit or divide sharing the IP Address, in practice, a hardware router is used to share Internet connection on a space or territory, an example of this router is the access point, areas that can get Ip address and an internet connection called Hot Spot Area.
Router is a PC Operating System has the facility to divide and mensharing IP address, so if a network device (pc) connected to a computer will be able to enjoy IP address or internet connection is propagated by the operating system, the operating system instance that can be used is all client-server-based operating systems, such as Windows NT, Windows NT 4.0, Windows 2000 server, Windows 2003 server, MikroTik (Linux-based), and others
Add Comment
Hardware
More From Author
Hardware
Load More