What is USB Port? 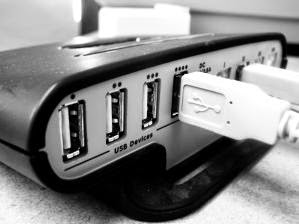 Definition and Function USB Port. Universal Serial Bus or USB is a port that is designed to allow a wide range of peripherals with a standardized socket that can be connected to both the computer so there is a lot of ports. This will improve the ability to plug and play which allows one device can be connected and removed without having to reboot the computer. USB also provides power supply for the hardware that consumes low power (+ 5 volts, 1 A) without the need to use an external power supply. Plus the ability to enable hardware used without having to install special drivers. function usb port
Given this, the USB ports can be combined as multiple ports to connect a mouse and keyboard (PS / 2), joystick, scanner, printer and others. All can be connected through a standard port, ie USB. In November 1995, the first USB USB 1.0 was introduced with the name promoted by Intel, Microsoft, Philips and US Robotics. USB is intended to replace many existing connectors on the back of the computer, thus triggering confusion and inconvenience users. In 1998, emerging USB 1.1 solve problems with the previous version. In April 2000, the emerging USB 2.0 is standardized by the USB-Implementers Forum (USB-IF) at the end of 2001 In November 2008, emerging USB 3.0 which currently use is not evenly distributed on all devices.

Below is capable of data transfer speeds delivered by USB, namely:
At any higher version supports speed version underneath, according to the device connected to it. Philosophy in the exchange of data in a computer is "adjusting to the slowest". Similarly, our brief review of the USB. May be useful.
Add Comment
Hardware
More From Author
Hardware
Load More