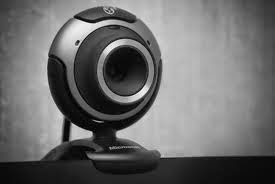 Webcam is a combination of the words web and camera. Webcam own designation for real-time camera (meaning the state at this time as well) that the image can be accessed or viewed via the Internet, instant messaging programs such as Yahoo Messenger, AOL Instant Messenger (AIM), Windows Live Messenger, and Skype, and others. The term "webcam" itself leads to a type of camera that is used for web-based services. Webcam itself is usually used for remote conferencing as well as a camera or monitor.
WebCam is an peripherals such as a camera as the image maker / picture and a microphone (optional) as getter sound / audio that is controlled by a computer or computer network. Pictures taken by WebCam displayed to the screen, because it is controlled by the computer so no interface or port is used to connect the WebCam with a computer or network. There are some people interpret as a WebCam Camera + Web pages, because by using the WebCam to take the actual video image can be directly uploaded when connected to a computer that controls the internet.
type Webcam
Serial and Parallel ports WebCam
WebCam is already too old type and rarely found anymore, because it produces nothing. In addition, this type of camera image quality is low and the low frame rate anyway.
USB WebCam
WebCam is a solution for this kind of new and amateur users. Facility supports PnP (Plug and Play) and can be connected to any USB port without having to turn off the computer, but the condition is a computer operating system must support USB port facilities.
Firewire and Card Based WebCam
Firewire is one of the technology of video capture device needed for cameras that support it. In general WebCam that requires video capture device is expensive, but can result in a high frame rate, ie 24 to 30 frames per second (fps).
Network and Wireless Camera
Network Camera is a camera device that does not require a computer at all facilities, because it can be directly connected to the network via a modem. Transfer images and sounds directly into a LAN network or via a phone line modem.
Free Webcam Software
Webcam is now becoming one of the services the rather loved the netters, let alone chat that there webcamnya or commonly known free web cam viewing. But not all people like to chat with webcam Webcam software automatically because it is one of the many programs that you should install, especially if you are using a laptop, of course, occasionally you will use the webcam to take pictures and also record video. Moreover, if you want to make security at home or at work you certainly want to get good results and service. For this time we will discuss some webcam software that are freeware but provides an interesting feature.
Here are 5 Free Webcam Software you can use to enhance your recording and web camera can also be used for streaming and security through your computer.
ManyCam
ManyCam is a webcam software that you can use, with an attractive appearance this application allows you to chat using Skype, MSN, and YouTube. You also can add thousands of cool effects to your webcam decorate like changing your face, eyes, hair, and can also add other interesting accesoris. It also can set the audio by adding audio effects and can also control the level of your voice.
vitamin D
Well this one is not inferior to the first one, even this application is also touted as one of the popular webcam software. For those of you who want to make a security / safety in your home using the camera, vitamin D could be one of the software that you use, because the main advantage of this software is able to detect moving objects or people in a video stream that is great again nah he also sent an email when there are moving objects that cross the line that has been determined, for example, there are people who pass through the window before it is set if there is a pass through window then this software will send messages to you. In addition to available for the free version, the software is also available for the paid version of the course with the addition of features.
Play Camera
Play The camera can also be an alternative for those of you who use the Windows operating system. This program allows you to take pictures and also record video using the camera as a source. With the addition of setting "Camera Properties" you can adjust several parameters such as brightness, contrast, hue, saturation, sharpness, gamma and white balance. In addition, you can also adjust the resolution, video and audio device settings that this would be very useful when you do video streaming.
Home Camera
Vitamin D is almost similar to its main advantages can be used to monitor moving objects captured by the camera. With this software you can connect 4 cameras at once to the computer and you can simultaneously monitor four cameras. In addition, you also can provide internet access to this software so that you can monitor your cameras from anywhere catches. Same with Vitamin D also he can also send a message to you to when there is suspicious movement captured by your camera.
Yawcam
Well for this is also one of the free software that you can try. Like anything else Yawcam software also comes with Motion Detection, and Video Streaming over the internet. In addition, Yawcam also supports Stealth mode. In this mode, Yawcam will start every time you start your PC, and will soon start recording without anyone else know
Add Comment
Hardware
More From Author
Hardware
Load More