Most Funny Thing I've Ever Seen 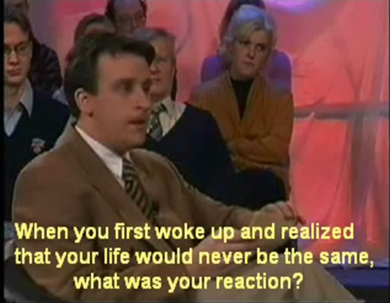 Today I am not writing about computers and technology. It is precisely on this occasion I would like to show a video that I think is quite embarrassing and funny.
I watched this video since two years ago but somehow until now I do not get tired to watch it repeatedly, and could always make me laugh. This video footage is actually the result of a TV shows which contains interviews with people who experienced the events that are not happy in their lives, but on the other hand it co-hosted the TV show footage that made me laugh. how come when all the people were seriously listening to the sad story but the host was laughing out loud by the sound of the unique and bizarre from one of the audience will be invited. The show host named Eric, he and his team are specialists in the TV show. But unfortunately since the embarrassing event Eric and his team were immediately dismissed from the TV company where he and his team work.
The TV show interview that had name "boemerang" is aired in Belgium but you can read the text subtitle in English anyway, I personally was not so concerned with its subtitle text as the most interesting part is in the expression of the invited guests as well as on the right when the host with all his might not to laugh, but ultimately resulting in spite also interview the TV show so dispersed immediately hahahaha lol.
Regardless of embarrassing things that happened in this video, but for me it is quite entertaining despite the moral side of it can not be justified, the point I laugh because I'am laughing at the host of the event, and not laugh at the audience in TV interview shows it. Until now I do not understand why I kept laughing at this video even though they had very often I watch it but it still makes me laugh. possible for you this video is not so funny, because the percentage and the perception of everyone's humor is different as well.

I recommend you to not do the same thing as what is done by the host showed in this video, besides being not polite also will certainly hurt the audience who may have the same situation as in the TV show it. Think of it as a strange thing that often you see everyday. Congratulations Eric, you have an amazing talent. Bye ..!
Add Comment
joke
More From Author
joke
Load More