√ My English Is So Bad, But I Get Thousands Dollar From Adsense - Clamourer Info

Home Motivation My English Is So Bad, But I Get Thousands Dollar From Adsense

My English Is So Bad, But I Get Thousands Dollar From Adsense 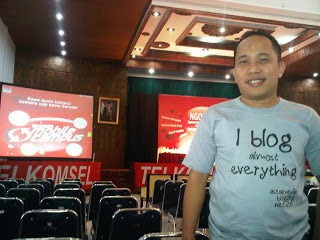 Internet marketing world has become a new thing and not enough demand by the people of Indonesia when compared with some countries such as India, Singapore, China, and others. The potential income you can gain from internet marketing is arguably incredible. With just sit down and make some articles in front of the PC or laptop you can make money in hundreds or even thousands of dollars via the Internet. Well, this is precisely what is done by a successful blogpreneur from Sulawesi-Indonesia origin, His name is Asri Tadda.
Asri start blogging in late 2012, at first he wrote several articles on the blog only for personal use. His passion in writing makes a man who studied at the Faculty of Medicine in UNHAS Indonesia, He is getting crazy with blogging activity. Even on the sidelines of the busyness of college, he often truant and online in cyber cafe near the campus.
Time continues until he finally discovered something of blogging during the time he did. He gradually began to recognize Blog Monetizing. Monetizing blogs is how we earn money from blogs.
He began his pace through one blog adversiting developed by Google called Google Adsense. From there he was ever a time to earn $ 400 USD which he used with his friends at college. His journey continues to grow until finally he had a steady income averaged $ 1000 USD per month.
Time passed, until finally he got banned or from Google for reasons of inadequate knowledge about blogging and also his English was not so good (On that time Google adsense did not support Indonesia, so local bloggers should make blog with the English to be able to follow this program, now starting in early 2012. Google Adsense has support Indonesian).
He did not give up, until finally he took part in another blog make money is paid review program. With a collection of number 50 blogs from one hosting provider free blogspot, where all blogs in English. From there he continued to struggle to find dollars.
Time passed, until finally he gets revenue from the sale of such a minimal amount Paypal link that can be taken is $ 100. Then Asri buy hosting services for US $ 95 and US $ 10 domain Thus, Asri was moved from a free blog to professionall blog. "My hardest challenge at that time was, I do not know internet marketing and my English is so bad," he said.
After switching to self-hosting, Asri reckless founded several businesses, including selling online article called Article Trading. "Every day I could sell about 50 articles. In fact the whole article is 200 words can be priced at US $ 5. For a fee of US $ 2 authors, for me US $ 3," said Asri.
In addition to Article Trade business, Asri also establish other internet marketing business that services of SEO (Search Engine Optimatization), a blog network advertising, classified ads service, and others. Of all the online business, it is misunderstood, Asri can get a turnover of about US $ 3000 per month, he only helped by about 13 employees.
His experience continues to grow, in 2008 he managed to get a second championship event Self Young Entrepreneur (WMM) national level. "At first I was not expecting to be a champion, because I think it's the business does not real, everything is just online. But thanks to Allah the mercyfull al-mighty I get the runner up." He explained.
The success in the arena of independent entrepreneurs into considerable energy. After coming back from there, Asri with some friends founded a company called AstaMediaGroup. The company is engaged in the field of internet marketing including establishing a Blog School first in Asia.
Add Comment
Motivation
More From Author
Motivation
Load More