In recent days, the media have published numerous photographs of the alarming air pollution in Beijing, the situation is so serious that apparently whoever breathe clean air have to buy bottled air. After that went on red alert in the capital of China after the terrible smog levels in the air of the city, a Canadian company called Vitality tries to capitalize on the situation by selling bottled fresh air. 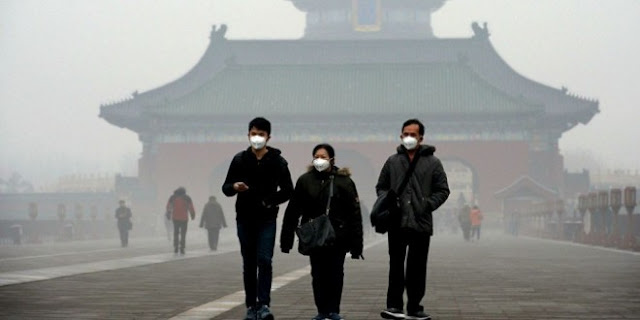 On its website, the company says you get the pure, fresh air directly from the Rocky Mountains in North America, bottling it in containers without any pollution. And although it seems ridiculous, the Chinese are buying bottled air which costs between $ 10 and $ 60 depending on the volume of the bottle. The most sold containing 3 liters of air, which equals $ 80 inhalations and costs $ 19. Taking into account that an adult at rest inhales air between 12 and 20 times per minute, it means that on average 3 liter bottle reach only 5 minutes of breathing clean air.
The representative of the Canadian company in China, Wang Harrison says his main clients are wealthy Chinese women buying bottles as gifts and exclusive nightclubs which are provisioned with the controversial product.
Most surprising of all is that the idea of selling air actually started as a joke, they admitted to The Telegraph the co-founder Moses Lam , who along with his partner Troy Paquette, decided to launch his company as a joke in 2014, selling air bags on eBay for $ 0.5. But the day he managed to sell one bag for $ 160, they realized they were behind a good deal.
This absurd situation is not the first time this has happened in China. In 2013, billionaire Chen Guangbiao , who made ​​his fortune in the "business" of recycling, sold 80 million bottles of fresh air in just three days, he said, to draw attention about the environmental problems of China. Whatever the shortcomings, needs or problems of a country, it seems there is always someone with "initiatives" to bring good economic benefit instead of providing effective solutions.
Add Comment
World
More From Author
World
Load More