If this is not love, we do not know what it is. A Japanese man who longed to bring back happiness to the lives of his wife after the blindness make her sullen and withdrawn he has cultivated a huge flower garden outside her home in Japan so she can smell them and thus, smile again. 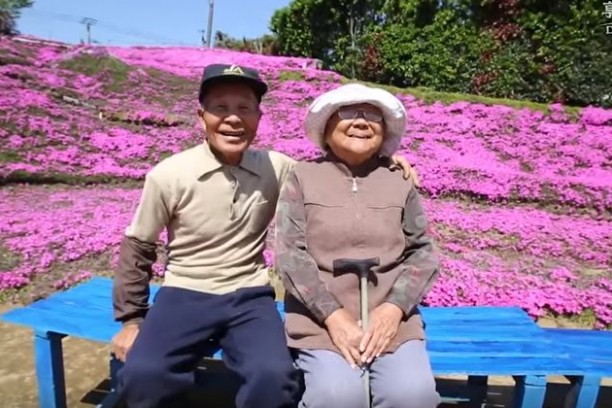 Mr. and Mrs. Kuroki two elderly farmers, living in an ocean of pink flowers attracts more than 7,000 visitors. It all started when the woman lost her sight due to problems arising from the diabetes. She was happy with her husband and two children, fell into depression and refused to leave her home.
Mr. Kuroki could not bear to see the suffering of his beloved and thought about what he could do to make her cheer. It occurred to plant flowers, classical and infallible gift all in love. But a bouquet is not sufficient, they would have to be many, a carpet of flowers.
So Kouri began planting the seeds of 'Shibazakura', a species of flower characterized by its strong and beautiful aroma. The old woman was not indifferent to the smell of flowers and began to leave home while the husband not stopped working for two years to complete cover the flower garden.
Kouri work now has become not only bring joy to his wife, but has attracted many tourists from all over the world who come to his home to see the beauty flower carpet.
Add Comment
Story Video
More From Author
Video
Load More