The photo of Mark Zuckerberg and virtual glasses going viral

An image of Mark Zuckerberg was taken during the first day of Mobile World Congress and has already become the image of Congress.  This haunting image of Mark Zuckerberg has become one of the most talked about of the day on social media themes. It was taken on the first day of Mobile World Congress (MWC), in which the founder of Facebook defended the technology of virtual reality. working day of the 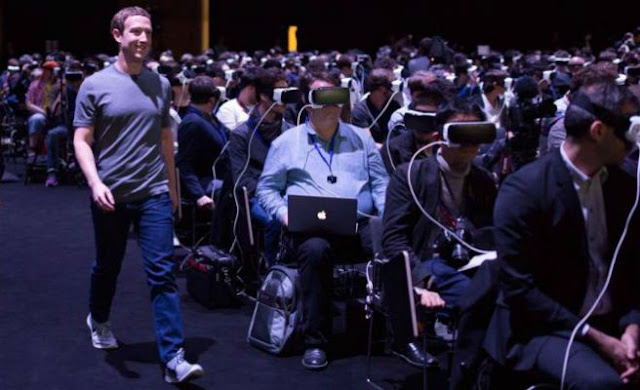 In that photo, Zuckerberg himself has shared it on his Facebook wall, you can see walking among around 5,000 people who filled the room, and they wore the glasses Gear VR Samsung. In fact, they were so focused that not even realized that their side was passing the founder of the social network most used in the world and were not aware of his presence until Zuckerberg took the stage and began to speak. See walking among around world and they were unaware of his presence until Zuckerberg took the stage and began to speak.
But why this photo is so successful in social networks? The image of Zuckerberg has become viral as l as social networks wonder if this photo is a sort of preview of what will be the world tomorrow, and whether one is coming in future. For now, this picture has been shared about 16,000 times and has more than 240,000 comments on Facebook. Here are some of them:
"Mark, it is not strange to be the only one who walks using his own eyes, while the others are zombies in Matrix?". "It seems the new season of 'Black Mirror'."
"I do not want live in a world like this. I want to be able to touch a flower, smelling it. I want to be able to hug someone and tell I love. I want to see a sunset with a tear on her cheek. I want to be able to feel the breeze on my face, smell the cooking, feel the human connection ... " :)
Add Comment
More From Author
Load More