It's off the Spanish island of Lanzarote that began last Sunday, January 31 immersion sculptures of Columbia Jason de Caires Taylor, marking the first stage of construction of the Museum Atlantic, the first European submarine museum. A total of 35 statues of the artist have been installed in the Canary waters Sunday; 300 are planned by the end of the project. All inspired by the inhabitants of Lanzarote, based on molds of ten citizens, these works were designed "concrete neutral pH and with materials that do not damage the seabed or the flora and fauna of the area, through the use of metals and materials that are not harmful to the seabed, "teaches us an official statement. 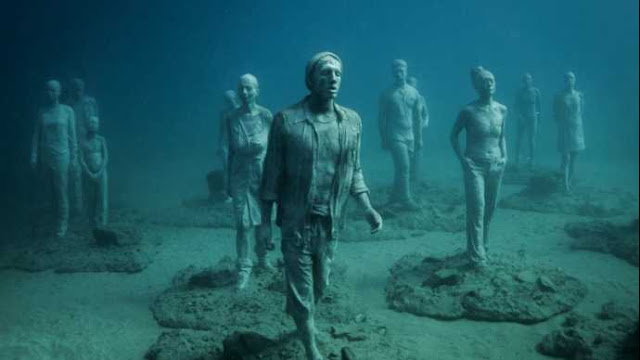 Better than that, this inanimate population should increase marine biomass and facilitate the reproduction of the species of the territory declared a biosphere reserve by UNESCO, for the next three hundred years!
Jason deCaires Taylor is not his first attempt since it has already produced other sculptures for previously existing submarine museums, including the Bahamas, the Caribbean and Cancun. He defines his work as a demonstration of "defense of the oceans."

Among the facilities available in Lanzarote, there is therefore a group of 35 human figures moving towards the same destiny, but also a challenge to the humanitarian crisis based on the painting by Gericault (La Balsa Lampedusa) or a couple taking a self-portrait called Contenido, inviting to reflect on the use of new technologies. The Atlantic museum will cover an area of ​​1 500 square meters off the municipality of Yaiza. Suitable for divers of all levels, and visible from the surface, its opening is scheduled for February 2017.
Add Comment
Tour Video
More From Author
Video
Load More