√ Where will land the rover ExoMars mission in 2018? - Clamourer Info

Home Science Video Where will land the rover ExoMars mission in 2018?

Where will land the rover ExoMars mission in 2018?

The ExoMars 2018 is the second part of the European Space Agency program (ESA) dedicated to the search for life on Mars. It will carry to the Red Planet rover it will take place on its surface. But how to determine the most appropriate place? CNES tells us more in a video.
Scientists CNES and the European Space Agency (Esa), the clay areas of Mars are definitely the best places to find life, if it exists. Indeed, being very old, they remained in contact with liquid water for long periods. It is in these layers of clay in 2018, the ExoMars rover will have the best chance to find chemical traces of life, if they exist. 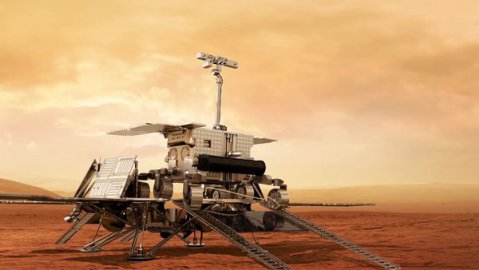 Mars is flown since already many years and well mapped; the scientists chose the area Oxia Planum to land the rover. This vast plain old 4 billion years has stratified formations ideal for trapping and potentially retain organic matter. The space probe MRO (Mars Reconnaissance Orbiter) is in orbit around Mars since 10 March 2006. For ten years, the satellite has taken countless photographs of the planet in order to map the surface. NASA has decided to bring together the best in this short video.
The satellite MRO (Mars Reconnaissance Orbiter) is part of the biggest having turned around Mars. With a total mass of two tons, it carries many instruments including a spectrometer, a radiometer, radar and the camera HiRise. These tools allowed many such capture stunning images visible in this video.
During these ten years, MRO has performed over 45,000 revolutions around the planet and likely participated in the observation of liquid water on its surface. The orbiter now allows identification of possible landing sites for a manned mission next important step in Mars exploration.
Add Comment
Science Video
More From Author
Video
Load More