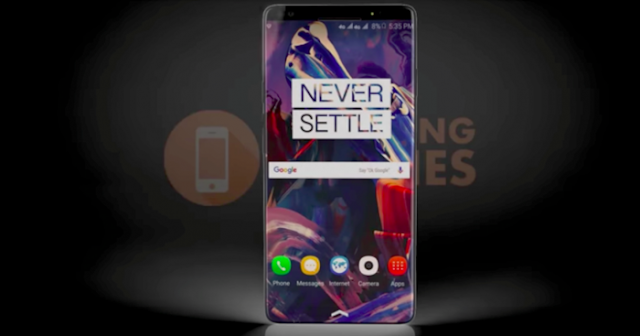 Oneplus 6. The OnePlus 5, officially announced a couple of months ago, has received a lot of criticism in its launch, but it is still one of the best rated smartphones 2017. However, when everyone expected a screenless design, the Chinese chose by using a more classic design leaving the great evolution and this sense for the next OnePlus 6.
Unlike the new trend of using a full screen, the OnePlus 5 features a screen with thick bezels above and below your screen. New rumors are speculating that the OnePlus 6 that is likely to arrive in 2018 will be coming up with a full-screen design. That is why this new concept of the OnePlus 6 has appeared on the Net to show what features we could find on the flagship of OnePlus for next year.
The first thing you can see in this concept of the OnePlus 6 made by the people of Upcoming Phones is that the smartphone has a double rear camera in vertical format in the purest style iPhone 8l. If you are already critical of OnePlus 5 as a clone of the iPhone 7 Plus, it is logical to think that the OnePlus 6 will follow the lines and forms of the next top Apple. 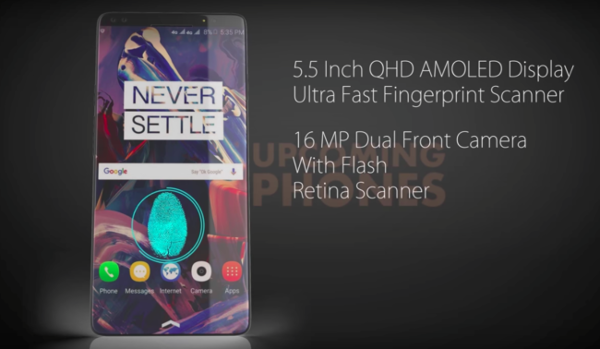 What will you find in the OnePlus 6?
Citing information revealed by the rumor, the video shows that the concept of OnePlus 6 has a dual camera system of 25 megapixels. As you can see, the dual LED flash separates the two sensors from the camera. However the most striking feature of the future OnePlus phone is its screen, as it has a screen without bezels except for a top frame. As shown in the video, theOnePlus 6 model lacks bevels on the bottom, left, and right sides of the screen, while the top bezel would also have a retina scanner. The specs rumored about the device suggest that the mobile would have a 5.5-inch AMOLED screen with FullHD resolution.
Another interesting feature that is shown video is the integration of a fingerprint reader on the screen, one of the technologies in which both Apple, Samsung, Huawei and other smartphone manufacturers are working in recent months. The concept suggests that the OnePlus 6 will come with an IP68 certified chassis, something that so far lack all smartphones of the brand.
The video of the OnePlus 6 also includes expected information such as 8GB RAM, the presence of Android 8.0 Oreo as operating system (with OxygenOS), 4,000 mAh battery with wireless charging support and even marketing colors: Jet Black, Gold and Pearl White.
Add Comment
Concept
More From Author
Concept
Load More