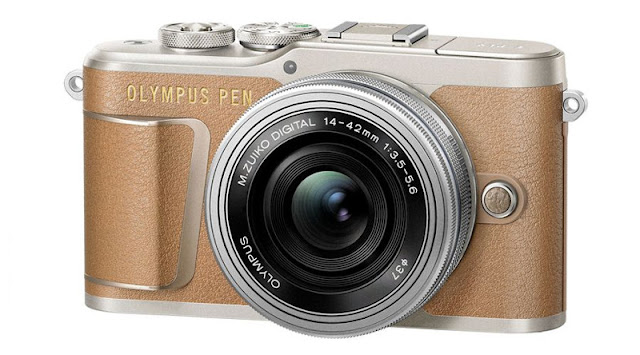 Comes with new AF system and TruePic VIII processor. The Olympus unveils its new stylish hybrid APN, the PL8 successor Pen E-PL9, which was revealed at the 2016 photokina. The improvements concern the handling, the integration of 4K / UHD video, the arrival of the latest processor TruPic VIII generation and a new 121 point AF system. A more marked evolution than the previous generation.
Olympus is evolving its E-PL8, a hybrid for the general public that focuses primarily on its look both retro and stylish to attract attention. The Pen E-PL9 gains a wider grip and more modern curves. Technically, the arrival of the 4K / UHD definition at 30/25/24 i / s and the integration of the latest-generation TruPic VIII processor, present on  the OM-D E-M1 Mark II, are also noteworthy. This new processor, coupled with the new 121-point AF system - compared to 81 for the previous model - should also optimize the responsiveness of the device.
The rest of the improvements are mainly about the handling, including a new menu interface for creative functions, an advanced photo mode that can be found on the Olympus OM-D E-M10 Mark III  and gives access to specific settings (Live Composite, HDR, sweep panorama, focus bracketing), two new creative filters and the integration of Bluetooth and Wi-Fi. Fi to share his files quickly and continuously on his smartphone, even when the device is turned off.
Finally, the E-PL9 uses the 4-1 / 4 "CMOS sensor of 16.1 MP, the multi-directional and tactile screen to navigate through the menus with the fingertips or to quickly focus, and the mechanical stabilization 3 axes to ensure better shooting in low light and avoids having to climb in sensitivity.

Olympus PEN E-PL9 UHD 4K Video Sample
The new hybrid Olympus PEN E-PL9 will be available in white, black or brown from mid-March at the price indicative of 549 € naked, or in kit with a 14-42 f / 3.5-5.6 EZ Pancake lens at 699 €.
Add Comment
Camera
More From Author
Camera
Load More