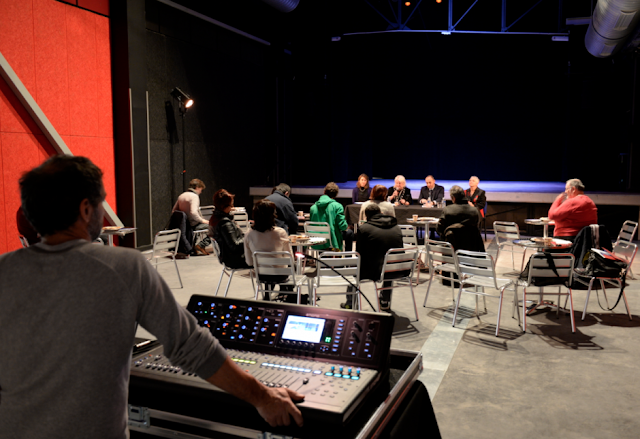 The first word you hear is "pride" and the sign that accompanies it is a broad smile that opens all these faces: the mayor, Michèle Picard, his deputy for culture, Bayrem Braiki, the Director the cultural department, Stephanie Issard-Ferrand, and the director of the independent administration's machinery, Françoise POUZACHE. Because this is a new structure that will handle all at once the Theatre of Venissieux, including Françoise POUZACHE is the director, and "Bizarre! "Which was hitherto an association.
After ten years of foreshadowing, "Bizarre! "Is no longer a project, because until now it was under the name Project Bizarre! that his actions were designated. "Born of a strong political will of access to culture for all and taking into account the diversity of artistic forms," ​​Bizarre! "Is firmly rooted in the vénissian territory, metropolitan and regional" ad Michèle Picard.
Out of a total cost of 1,830 million euros, the state contributed $ 1.2 million as part of the Staffing City Policy, the Region 58,000 euros and 572,000 euros municipality. "At a time when some local authorities benefit from austerity to settle scores with the cultural community in Venissieux we choose to continue to spend 9% of our budget to culture. "
In the building of the former Truc (k)
Located in a renovated building that housed the old Truc (k), a mythical theater of the eighties, "Bizarre! "Will have a metropolitan dimension since it will be labeled SMAC (current music scene) as the S2M, an entity that brings together four areas of the agglomeration: Modern Grocery in Feyzin," Bizarre! "In Venissieux. The Periscope Station and The Market-Lyon. Add to this a grant from the DRAC 300 000 euros to share between the four locations.
At the foot of the stage of 142 m2, in a room that will accommodate "390 people standing", Bayrem Braiki tribute to "work behind the scenes" performed by City departments, teams of "Bizarre! "Theatre and all these people "working in unison". Besides this theater, "Bizarre! "Also includes a tray with creation of three rehearsal studios equipped too, including one with a recording room, a media room and a reception area and offices.
After the departure of Michel Jacques, who wore "Bizarre!" Over the last decade and has also scheduled the Parties festival stops, the new machinery will recruit a project manager. " He will be in charge, explains Françoise POUZACHE, programming shows concerts, also open to dance, and residences. Taking into account the aesthetics of "Bizarre! "That is to say, urban cultures, digital arts and world music, we expect thirty cruising speed events. We will have both young emerging artists and amateurs, with open mike nights and early stages. The room can also be rented to turners, respecting of course aesthetics. "
Add Comment
Culture
More From Author
Culture
Load More